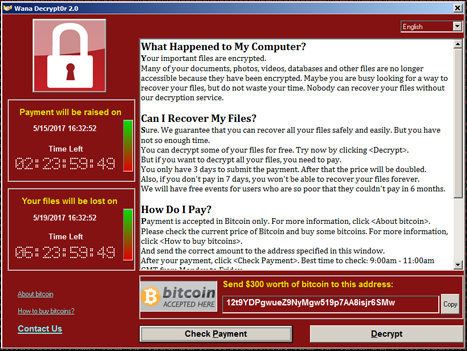 Unless you’re living in a cave you’ve read about the huge attack on computers around the world called WannaCry.  On Windows systems that are out-of-date it can infect the PC and encrypt all the files.  Bitcoin payment is required to decrypt them,  You can read more about the exploit at Wikipedia.

This is a Microsoft Windows issue, so any PC with this operating system is vulnerable, particularly if it out-of-date or not the current version.  This means the all versions from XP onward could have the problem.  But if you have Windows 7 or Windows 10 and have been keeping it up-to-date your risk is minimal,

However, many have not kept up with the new releases and are still running versions as old as XP, where updates ceased some time ago.  This is particularly true of businesses, where the cost of keeping up with new Windows versions can be prohibitively expensive.  A glaring example of this is the British National Health Service, who were one of the most seriously hit.

Steps You Can Take?

Due the extreme seriousness of this attack Microsoft has taken the most unusual step of releasing patches right back to, and including, XP.  So if you’re running XP, Vista,  Windows 8, or any of the Windows versions listed on the page at the link below, you should apply the patch as soon as possible.  However, finding them on the web is not as easy as it should be, so the link below will take you directly to the download page at Microsoft.com.  Choose the one for your version of Windows, then download and run it, following the installation wizard instructions.